What are the symptoms of sleep apnea? 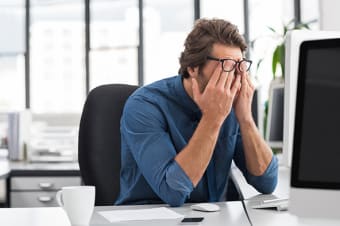 Sleep apnea interrupts breathing during sleep and can lead to a number of physical and mental health issues. But how do you know if you have sleep apnea? Here are a few of the signs and symptoms of this common disorder.

Those who suffer from Sleep apnea experience pauses in their breathing while asleep. These pauses can mean that not enough air reaches the lungs.

Sleep apnea isn't just snoring, it's a relatively common but serious condition that can lead to a number of health problems. Those suffering from sleep apnea should seek diagnosis and treatment as soon as possible.

That said, often people who have sleep apnea don't even know it.

Because the symptoms of sleep apnea tend to develop gradually over time, many people aren't aware that the difficulties they're experiencing in their day to day lives are being caused, in part, by sleep apnea.

That's why it's important to watch for the signs and symptoms of this condition.

The two key symptoms of sleep apnea are:

Other signs that you may be suffering from sleep apnea are:

If you think that you may be suffering from sleep apnea contact your Surrey dentist at Cloverdale Crossing Dental Group to book an appointment. Your dentist can help you to get the treatment you need.